This trackpad supports all the Apple multitouch gestures, and can be set up to respond to a tap or a proper click. For reasons best known to Apple and Logitech you need to download Logitech's preferences software to configure it, rather than it appearing in the native Trackpad panel, but once you do this, all the same options are available.

Ever since I began using a MacBook Pro when the first models were released in 2006 (which, incidentally, was my very first Mac), I began to lose interest in mice as a pointing device. After using my MacBook Pro”s trackpad for several months, I began to despise mice for their lesser degree of accuracy (in my opinion), the annoying clicking sound they echoed through a room, and even the clunky shape of most mice.

When Apple brought advanced multi-touch gestures to their trackpad (starting with the late-2008 MacBook Pro, my preference for trackpads over other pointing devices became even stronger. Never before had I experienced so much intuitive comfort and control in a pointing device. Apple’s trackpads changed the way I used a computer forever.

Once the Magic Trackpad was released, I transformed my MacBook Pro into a desktop setup, taking advantage of the larger surface that the new external trackpad offered. Apple’s trackpad, with its large 5-inch square surface, existed without direct competition (especially compared feature-to-feature, and in terms of pricing) for quite a while. It simply had no equal.

Logitech aims to change all that with their Rechargeable Trackpad for Mac.

Te real question is whether the Logitech Rechargeable Trackpad is really as good as it seems. Can it really match Apple’s Magic Trackpad where it really matters – performance, precision, and ease and comfort in practical use? We put one through its paces to find out.

At first glance, the Logitech T651 appears extremely similar to Apple’s Magic Trackpad, with the exception of a seamless top surface (by comparison, the Magic Trackpad shows a seam where the battery tube connects to the glass trackpad surface). The surface of the trackpad has a similar feel, being made from the same touch-sensitive matte glass as Apple’s own magic trackpad.

Rather than using an aluminum frame, as Apple’s Magic Trackpad does, the Logitech T651 is built into a plastic frame – although it does feel every bit as sturdy and solid in actual use as the Magic Trackpad. The side of the device features a simple sliding switch to turn the power off and on, and a single button on the bottom to place the device in Bluetooth pairing mode in order to connect with your Mac.

The design reflects a simple elegance that feels very much at home next to an Apple product – it’s as beautiful and elegant to look at as it is useful. Finally, on the back of the device, you’ll find a single Micro-USB port used to recharge the device. The Logitech T651’s rechargable battery gives it a key advantage over Apple’s Magic Trackpad, and prevents you from having to waste time and resources constantly replacing AA batteries to keep the device in working order.

To Logitech’s credit, the Rechargeable Trackpad for Mac supports all of the same gestures as Apple’s Magic Trackpad – although it requires you to download a driver and a Preference pane in order to take advantage of multi-touch and advanced gestures. Downloading and installing the software only takes a few short minutes, however, so it doesn’t affect the real-world experience of using the trackpad.

Also like the Magic Trackpad, the T651 allows for touch-based “clicking,” as well as tactile clicking if you press down on the device – a feature which many users prefer, and which Logitech was wise not to overlook. The ability to recharge the trackpad while it is in use is also a HUGE plus – Apple’s Magic Trackpad does not offer the same luxury, requiring you to physically replace the expired batteries with a fresh set before continuing. As such, the experience is essentially one in which you never run out of power, and never need to stop using the device due to battery drain.

While the T651 is just as comfortable to use as the Magic Trackpad once you get used to its somewhat flatter angle, in my experience, the physical click of the t651 wasn’t quite as definitive and satisfying as with the Magic Trackpad.

Setting up the Magic Trackpad for the first time takes only a few moments, and is as simple as turning on the device, pressing the button on the bottom of the device, and selecting it from the Bluetooth pane in System Preferences. To enable the trackpad’s advanced gestures, you’ll also need to download a driver, which takes a few moments to download and install.

Customizing the trackpad’s gestures to meet your preferences is a nearly identical process to configuring a Magic Trackpad – the Logitech preference pane will be very familiar to users of the Magic Trackpad, allowing you to select which gestures you want to use, and how various actions – like tapping and dragging your finger – will affect the device.

The seamless surface of the T651 does come with one adverse affect, however – the touch sensitive portion of the device does NOT extend all the way to the top of the glass surface, stopping just below the level of Logitech’s logo. This left me frustrated more than once, as I occasionally lost traction while using the device because my finger got too close to the boundary. 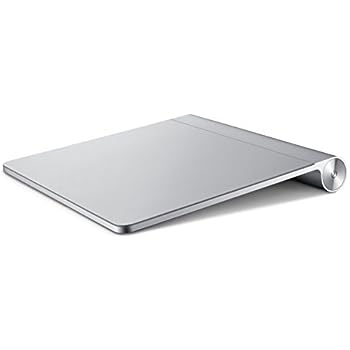 This lack of precision, more than anything else, hands back almost every advantage Logitech could have had right back to the Magic Trackpad. For doing serious design work, the Magic Trackpad just provides a cleaner, more precise, and thereby a simpler and less frustrating experience.

The Logitech trackpad is every bit as attractive as Apple’s own trackpad, and offers all of the same gestures – and with the addition of a rechargeable battery (which can even be recharged while using with the device), Logitech had a real chance of taking on the Magic Trackpad in every way, offering a better overall feature set for the same price. Unfortunately, the Logitech T651’s lack of precise finger tracking (and precision in general) is its downfall.

If Logitech had employed just a little bit more attention to detail, they could have had a real Magic Trackpad competitor on their hands. Instead, the T651 fails in performing it’s most important task as a trackpad: precise gestures and precise cursor control. As a result, I have difficulty recommending it to anyone who plans to use it for anything more than office work and web browsing.

While I wasn’t all too impressed with the Logitech t651, I do look forward to experiencing their next trackpad. If Logitech can resolve the relatively minor issues plaguing the T651, I can see them producing a trackpad that is superior to the Magic Trackpad in every way in the not-so=distant future.

For more information, visit Logitech’s product page on the web. The Logitech T651 Rechargeable Trackpad for Mac is available now directly from Logitech. It can also be purchased for as little as $46.88 from Amazon.com.

« Finance App For Mac And Ipad
Group Policy For Mac»