Leap Motion is also not a great input alternative to the Vive controllers. First, the Leap Motion only sees directly in front of you, so your hands can't be behind your back or at your sides. Second, the camera cannot distinguish one hand from the other when hands are touching. In this video I show BetterTouchTool's Leap Motion Controller support. I'm using the new version 0.97. More information: Note: this ha. Our world-leading hand tracking and haptics powers intuitive, touchless gesture control in AR/VR, interactive kiosks, digital out-of-home and automotive.

Ever since Tom Cruise played PreCrime piano with a gesture-based workstation in Minority Report back in 2002, motion control looked like a sure bet as the interface of the future. Although the movie is set in 2054, it only took four years for motion technology to go mainstream, thanks to the Nintendo Wii in 2006.

Of course, the Wii used a relatively crude handheld controller to read motion, a system Microsoft improved upon with the Xbox Kinect, which uses sensors to turn the user's entire body into a controller. The Kinect proved so popular that Microsoft opened up the device to Windows users, although it's gotten little traction there.

The Leap Motion controller, on sale today, thinks it can do better. Leap is a tiny device, only slightly larger than a USB thumb drive, and its creators say it's many times more precise than the Kinect. It's cheaper, too — $79.99 to the Kinect's $99.99.

The Leap has its work cut out for it if it wants to create a future where we interact with our computers by pointing and waving, though. As good as its ability to track my finger moving in space may be, is it a natural and useful way to use a computer? In other words, is the Leap worth it?

For some activities, yes. For the past few days, I've been using a Leap Motion controller the company lent us, and like many impressive pieces of hardware, it's only as good as the software that runs on it. Some of the apps, especially games, are amazing — addicting, even. Other apps are poorly thought out, though, and the system certainly has its share of bugs.

How to judge it, though? The Leap isn't just a new product; it's a new class of product. Motion control for computers is in its infancy, so it would be unfair to give the Leap a thumbs-down if it fell short of up-ending the entire idea of human-PC interaction. I set the bar at whether it could convince me to ever hook it up again. 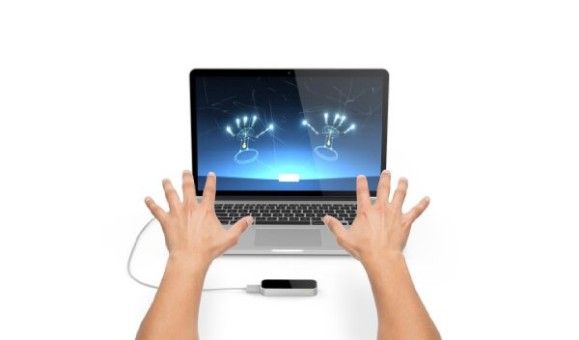 The Leap is easy enough to set up. You hook it up (via one of the two provided USB cables), visit the Leap website, download some software, and you're cooking. There's even a clever video with some tips on placement of the sensor.

The main Leap app is called Airspace, and it's really just a hub for all your Leap-compatible apps. When you first launch Airspace, it immediately starts Orientation, a basic app that graphically shows you how the Leap works. It shows the area the Leap is scanning with a cone and encourages you to wave your hands to get a feel for things.

At least, that's what it would have done if it worked right on my PC. On my Toshiba KIRAbook, I could only see the top-left corner of the app's window, and it played havoc with my screen resolution. Maybe the Leap was thrown by the KIRAbook's ultra-high-res display, but in any case, it's a bit buggy. But all the other apps worked fine.

The Leap worked better on my MacBook Pro (Leap supports both Windows and Mac computers), although I noticed it wasn't quite as nimble as it was on my KIRAbook. It was fine, but for best results, you're going to want a recent machine with USB 3.0 ports to really tap the potential of the Leap.

I browsed the pre-loaded apps in Airspace to see what the Leap could do. A DJ app called Swoosh bored me pretty quickly, and a Frog Dissection app, which lets you make incisions by moving your finger, didn't convince me the experience was any better — or even the equal of — a touchscreen or even a mouse and keyboard.

Then I came across an app called Dropchord. Oh, baby. This is the app Leap Motion should use to showcase what its controller can do. Dropchord is a dynamic game that lets you vaporize dots with your fingers. Your two fingertips control two ends of a deadly line, which you use to destroy all the dots you can. It's fun and addictive, but it wouldn't be nearly so if it were done on a touchscreen.

Other apps had their moments: Chordian Conductor, a musical keyboard app, makes great use of Leap's precision as you carefully navigate from key to key with your fingers. Its level of customization is impressive as well, although the complexity necessitates a rather lengthy tutorial at the beginning.

In fact, that's an unfortunate common thread with many Leap apps: Many insist on throwing multiple screens of instructions at you before you can actually do anything. They'd do better to follow Dropchord's example: It assumes you have your Leap hooked up (why else would you have launched it?) and presents two targets for your fingers to get started. Virtually all instructions are experiential — that is, you can practice them as you're being instructed.

The New York Times app is actually a good first stab at a motion-controlled news reader. It presents you with a row of story cards you can browse by flicking your wrist. Point your finger on one and it quickly opens, 'dimming the lights' on the rest of the page. Navigation instructions appear when you need them, so they're not intrusive. It's nicely done — you can see the Times experience with mobile apps shining through.

On both Mac and PC, Leap offers a Touchless control app, with lets you perform basic navigation via the Leap. With Touchless enabled, you're freed from relying on mice, keyboards and touchscreens to interact with your computer — most of it can be done via gesture.

At least that's the theory. In practice, you rapidly discover how difficult it is to use midair finger movements to manipulate icons and windows that were never designed for that kind of interface. As I tried to perform basic scrolling on a webpage, I kept accidentally clicking on things. Trying to zoom in on a map was a hopeless affair.

The same problem reared up when I tried out the Leap on Google Earth. Tiny movements had big consequences in the Earth app, changing my speed and direction in ways I could never predict. The arrows and icons that appeared to supposedly help my movements were a gibberish. There really should be a standard way of interacting with maps via gesture, but without it, you're at sea.

As a general-control interface, the Leap currently isn't well suited to do much more than basic clicking. However, with better standards, a few software iterations, and user practice, I could see it getting to a point where it could do more. It's potentially more convenient to twirl my finger to scroll rather than reaching for a mouse.

Motion control is here to stay, but the question is: can it ever become a basic part of how we interact with machines? Perhaps, but the Leap Motion hasn't quite made that case. It's a little buggy, the controls are often difficult to master, and the apps that best showcase its abilities are little more than gimmicks.

Remember, though, that this is a 1.0 device in a field that's evolving rapidly. Also remember how we should judge: The Leap doesn't have to usher a world of fierce and fluid gesturing à la Cruise's future PC on the first try. It only has to keep us interested enough to leave it hooked up. For the bonus round in Dropchord alone, I'll be taking another Leap. That bit really cooks.